The financial hypocrisy of Kalamity Kate 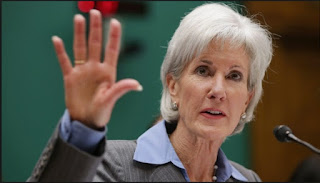 Former Kansas Governor and defrocked Obama Health and Human Services Secretary Kathleen Sebelius is beside herself over the state’s financial situation under Governor Sam Brownback’s tax cut policies. How odd – when she occupied the governor’s office and scuttled a $2.8 billion investment in the state’s electrical infrastructure with repercussions still felt in the state today, she seemed to have far more pressing concerns than the state’s financial picture.

“Kalamity Kate,” as she’s called out west by those whose fortunes were foregone when she sandbagged the Sunflower Electric plant upgrade at Holcomb, told a Kansas City public radio station recently it “would take decades” for the state to recover from Republican tax cuts that trimmed taxes without commensurate spending cuts during a continued sputtering state economy. “It breaks my heart,” she lamented to KCUR’s Steve Kraske.

Nearly 10 years later Sebelius has finally developed a financial conscience, after earning the moniker “most economically damaging governor in Kansas history” for pulling the plug on the Holcomb power plant expansion. As you recall, Kansas Department of Health and Environment staffers had already analyzed Sunflower’s plan for emissions control and other environmental impacts from a double power unit expansion plan at Holcomb and given the massive investment a green light, but secretary of KDHE and Sebelius appointee Rod Bremby suddenly refused to approve the project. When pressed, Sebelius stood by her man instead of overriding his veto. The whole thing smelled a little funny.

The reasoning of course was that before Sebelius botched her play as secretary of Obama’s Health and Human Services, she was an up-and-comer in the national Democratic party with a bright future and possibly even a VP or presidential spotlight upon her. She and the party desperately needed a way to get her on the national stage, and an appointment to Obama’s cabinet was the logical move. But she’d need to bow to the leftist playbook extolled by Obama’s administration – particularly in favor of environmental over-reach and copious regulation – so Sunflower’s project and all its benefits for Kansas was sacrificed for Sebelius’ ill-fated political ambitions.

So when she laments the possible long-term impacts of Brownback’s tax cuts, it seems all too fair to ask what the impacts of her Sunflower decision have been over the past decade. How many construction jobs never happened? How many dollars from those jobs never circulated in the western Kansas economy? How much was lost in sales tax from associated purchases? How much was lost in property taxes from the cancelled expansion, and in income taxes from Sunflower’s sale of power both to Kansans and to Coloradans to whom the company would have exported power over the grid? There’s little doubt the economic loss compounded the impact of the recession in Kansas. The benefits that could have, but which never happened, certainly contribute to the state’s continuing economic lethargy.

In all of Kansas’ statehood, no governor ever did comparable economic damage.

Subsequent to Sebelius’ exit to pursue her disaster at HHS, lieutenant governor Mark Parkinson took the governor’s office and brokered a deal to cut the project in half and get it approved, but a lawsuit by the Sierra Club stymied it again until the Kansas Supreme Court ruled in its favor this month. The embattled project may, one day, get off the ground in spite of hurdles that bolster leftist philosophy and politics over common sense and economics.

For Kalamity Kate Sebelius to wreak such economic havoc in Kansas and then pronounce judgment on what is partially her own legacy is inauthentic, at best.


– Dane Hicks is publisher of The Anderson County Review in Garnett, Ks., and can be reached at dhicks@garnett-ks.com

Posted by The Anderson County Review at 12:27 PM 2 comments: 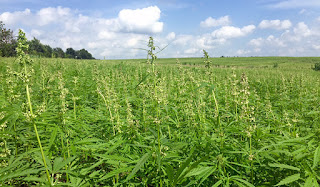 A curious spotlight is turning on the Kansas Peace Officers Association and the Kansas Sheriff’s Association in their opposition to legalizing industrial hemp in Kansas.

What is being illuminated is an embarrassing question: Why is it cops in a couple dozen states and numerous other countries which have legalized hemp for agricultural use can tell it from its cousin marijuana, but apparently Kansas law officers can’t?

That seems to be the big rub in Kansas law enforcement’s opposition to House Bill 2182, which would legalize industrial hemp and allow it to be cropped by Kansas farmers during a time when farmers need all the help they can get due to low commodity prices. Police and sheriff’s associations in Kansas seem resolute in their opposition: that they cannot tell spindly-looking hemp from stouter marijuana plants, and that they apparently cannot ever learn the difference.

Backgrounder: Industrial hemp is defined by having only 0.3 percent or less THC – the drug in pot that gets you stoned – compared to marijuana plants that contain concentrations of some 18%-30% of the drug. You could smoke a bale of industrial hemp and never want a single Dorito.

Identifying hemp doesn’t seem so complicated to cops in non-Sunflower State jurisdictions. The National Conference on State Legislatures notes hemp is grown for its thinner, more fibrous stalk and its seeds. “The plant is cultivated to grow taller, denser and with a single stalk. Marijuana, grown for the budding flowers, tends to be grown shorter, bushier and well-spaced.”

But Kansas law officers won’t budge, so Kansas farmers remain locked out of a market other states are developing, aiming to feed an estimated $600 million to $2 billion annual U.S. market for hemp products – most of which is now being provided to the American market by Canadian growers and processors.

See, you can buy hemp-based snacks, clothes, hemp oil dietary goods, beauty products, paper, textiles and construction materials to your heart’s content in Kansas or anywhere else in the country – and lots of people do – they’re as legal as a Snickers bar and a 7Up. But until 2014 it was illegal to grow or process hemp in the U.S.  For decades all those U.S. purchases funded growers overseas.

The 2014 Farm Bill legalized research and commercial use in states that approved it. So far, 16 states have approved commercial growing and 20 have approved pilot and research programs aimed at eventually giving their farmers the advantage of a new cash crop. Kansas could have harvested its first hemp crop ever this very year – except the same law officers’ organizations last year shot down enabling legislation by spooking distracted legislators with the hemp ID worry.

Not only does growing the product hold promise of more revenues for Kansas farmers, but processing facilities that turn the plant stems into fiber and which extract oil from the seeds also offer economic benefit through jobs and local tax base development. They could be constructed and operated by local commercial developers or by farmers’ cooperatives that would then direct those revenues back into their own communities via sales and dividends. Farmers’ fields as well as processing facilities can be easily inspected by authorities and fees charged to license them.

And if farmers and local businesses benefit, so do cops. More jobs and legitimate money in a market typically means less street crime; a richer tax base means less resistance to funding public services like police and sheriff’s offices. Kansans as a whole respect and honor the abilities and duties performed by their law enforcement – all you have to do is look at various support efforts and blue lights on people’s porches in the state. No one wants to legalize hemp to give cops a harder time.

What this spotlight on the cops shows is that their opposition to hemp most likely isn’t really based in some concern about identifying the plants. It’s most likely based in group-think fostered by a professional culture that has been anti-marijuana since the 1930s. In cops’ minds, hemp is pot, regardless of the science that proves otherwise.

That’s unfortunate, because it places those we trust to protect and serve in the position of hurting Kansas farmers and thwarting jobs in the communities they call home.

–Dane Hicks is publisher of The Anderson County Review in Garnett, Ks., and can be reached at dhicks@garnett-ks.com.

Posted by The Anderson County Review at 2:50 PM No comments:

SEND IT IN! The winning entry may be in your hands right now!

Be sure to send in your SPRING SWEEPSTAKES entry – your entry number may have already been selected the winner of one of our 8 $50 consolation prizes, our $100 runner-up prize, or the $500 grand prize!

Just fill out the entry card and return in the marked return envelope. 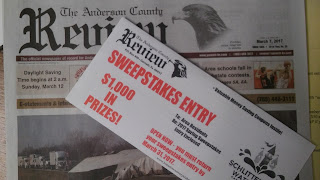 Posted by The Anderson County Review at 3:48 PM No comments: