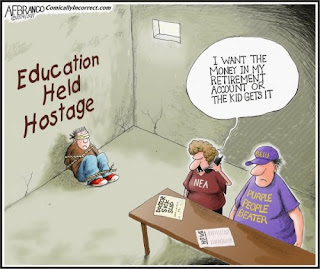 by Dane Hicks – How odd that so much media criticism after the recent Florida school shooting has been focused against the National Rifle Association instead of the National Education Association.

After all, school shootings involve guns and schools.
But as instance after instance of school shootings has unfolded across the country over the past two decades and high-profile criticism and media attention constantly focused on the NRA for its support of constitutional gun rights, a review of media reports shows no limelight at all focused on the NEA for failing to make schools safer.
It’s an irony that apparently escapes many journalists – if an association of 5 million members like the NRA bears responsibility for the violence committed by murderers with guns (none of whom have been NRA members, notably), then shouldn’t an assessment be performed of the NEA, with its 3 million members, and its failure to make school’s safer?
Interestingly, a review last week of the posted information on the NEA’s website shows no such instruction to staff and administration for ensuring safer schools – no outline for upgraded security measures or instruction to schools on their implementation; no video presentations on “Run, Hide, Fight,”; no insight as to identifying troubled students who might potentially turn violent and how to implement treatment.
There are no hiring guidelines for school guards or criteria for assessing their ability and willingness to engage a possible school shooter. No suggestion of evaluation for auto-locking doors or magnetic switches which lock down or sound alarms if large metal objects are brought close to them. No treatise on what it is about public schools that goes so terribly wrong for some students, and why those schools are so often the target of the deranged.
What the NEA’s website does include is plenty of self-serving political aggrandizement. “Tell Betsy Devos It’s Time To Resign” heralds one header on the slideshow of main backgrounds. “What Do Vouchers Have To Do With Protecting Bullied Students?” and “It’s Time To Take Action: Students Lead Protest To Change Gun Laws.”
It’s worth mentioning, of course, that capitalizing each word in a sentence isn’t proper grammar – but oddly  a style adopted by an association of educators.
The larger point is that while school shooting news coverage attacks the NRA for pursuing its members’ interests and assigns guilt based on the belief that owning firearms is a constitutional right, there is no similar expectation or attention paid to the organization which collects dues from teachers at each location where a school shooting has taken place.
The NEA, in fact, at least from the content of its website, has offered no proposals for more secure schools whatsoever – yet its mainstay of membership is those very public schools whose safety it ignores.
While it offers nothing in the way of guidance or instruction for preventing or surviving a school shooting, the NEA has actively explored its own right to free expression and political activism by generously supporting Democratic political candidates. From 1989 through the 2014 election cycle, the NEA spent some $92 million on political donations, 97 percent of which was paid to Democrat candidates.
But throughout the post-Columbine era – shootings at Red Lake, Minn., the Amish school shooting in Nickel Mines, Penn., the Virginia Tech shooting Newtown, Conn., Umqua Communitiy College – the NEA repeatedly committed none of its budget to develop school training programs for security or tactical survival in a live shooter situation, or devoted resources to studying why students go crazy and attack schools.