What does EPA head Scott Pruitt want in Garnett, Ks.? 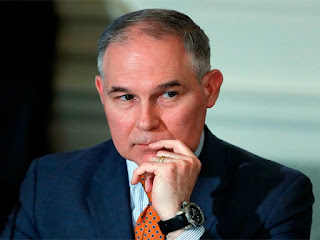 It’s hard to imagine, with his short tenure as Administrator of the U.S. Environmental Protection Agency under fire for malfeasance by Republicans and Democrats alike, what Scott Pruitt wants in Garnett at a special meeting with East Kansas Agri Energy this coming Tuesday morning.
We have to imagine it’s not about ethanol or schmoozing the farm vote at all – we think it's the lunch special at Trade Winds.
Why else would the Administrator of the EPA – the Big Cheese, the Top Brass, The Big Kahuna – want to tour an ethanol plant in Eastern Kansas and meet with its principals and investors, when he’s spent a good portion of the last year acting against his boss (President Trump)’s directives and shooting holes in the law that supports the ethanol industry and the farmers who play such a core role in it?
Pruitt’s been under fire almost since he first mashed his bare toes into the deep pile of the EPA’s head office carpet. The former Oklahoma Attorney General, jointed at the hip with his state’s oil industry, was one of a flurry of picks when President Trump’s surprise election pressed him into finding cabinet members ASAP. Pruitt, who Iowa Senator Joni Ernst once referred to as being “as swampy as you can get” washed in through the drainage ditches of political favor to the detriment of tax payers, Midwestern farmers and the Trump Administration itself.
Allegations against Pruitt of largesse on the tax payer dime are Tudor–esque; that he had a $43,000 sound proof phone booth built for his office in order to have private phone calls; that he plugged some $105,000 into first-class airfares because some of the rabble in coach were once rude to him; that his 20-person security detail (c’mon, you’re the EPA guy, not one of the Getty children) burns millions; that a Washington lobbyist buddy got him a sweetheart deal on an expensive DC condo; that he’s cozied up to industry big-wigs he’s supposed to be regulating – and that he even hurried EPA office staff off to buy him a discounted mattress from the Trump International Hotel. That list, unfortunately, goes on.
But his biggest sin – and the one that will probably be his undoing – is his back door attacks against farmers and the Renewable Fuel Standard. The RFS is the portion of the 2005 law that requires oil refineries to blend ethanol into their gasoline. Pruitt’s friends in the oil business aren’t fond of ethanol, so to a handful of them the EPA chief has been handing out “hardship waivers” exempting them from the blending requirements – which means they save money by not having to buy ethanol and mix it into their gasoline like other refiners do.
If the cronyism and fiscal abuse in his office isn’t enough, it’s Pruitt’s stance against ethanol – contrary to the federal law he’s supposed to be administering as head of the EPA – that has him in the crosshairs of influential Republicans who want to keep the Midwest farm vote for the president in 2020. For that, Pruitt’s recent shenanigans in alienating the farm vote just won’t do.
Our bet is Pruitt’s new affinity for agriculture states and ethanol plants has to do with trying to save his skin – or at least an attempt to assuage farmers’ fears and remind them that President Trump is, despite the actions of his EPA head, still behind them. Maybe, after torpedoing the ethanol industry, Pruitt’s Come-to-Jesus with ethanol at EKAE this Tuesday can make everything all right.
Then again, maybe not.
Either way, the flight from KCI to DC is a little more than two hours – long enough for a nap after Trade Winds chicken & noodles. Pruitt may need those extra carbs when he gets home – to pack up his office.
–Dane Hicks is president of Garnett Publishing, Inc., and publisher of The Anderson County Review in Garnett, Kan.

Posted by The Anderson County Review at 6:52 AM 2 comments: