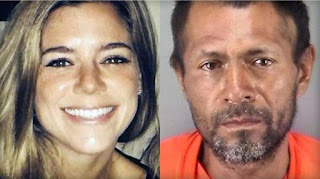 As 32 year-old Kate Steinle lay dying in her father's arms on trendy Pier 14 in San Francisco back in 2015, pleading with him to help her, she had no idea the bullet in her heart fired by a five-times deported illegal alien would amount to a reset in U.S. policy toward illegal immigrants.
With an election coming in 2018 and Garcia Zarate's acquittal of murder and manslaughter charges in her death last week swelling "sanctuary city" policies more into the national spotlight,  the Kate Steinle incident may be the near equivalent to the shot heard round the world.
While there is no comfort in the verdict for the Steinle family, it is likely that the San Francisco court indeed found the closest version of the truth. The homeless Zarate, confirmed as a convicted felon and five-time deportee to his home Mexico, claimed to have found the weapon in question wrapped in rags under a park bench, and bobbled it when it fired by accident. Forensics showed the slug ricocheted off the concrete pier deck before striking Steinle.
At issue was whether Zarate fired the weapon purposefully, not whether he had previous felony convictions or was in the country illegally or whether San Francisco's status as a sanctuary city contributed to Steinle's death. The verdict itself was most likely a right one – one that illustrates the strength of the U.S. justice system when it works correctly. Zarate will do time for being a felon in possession of a firearm, then be deported back to Mexico. Again.
But those other issues will indeed be a focus in the court of public opinion, and it is there that they will find their political weight toward the future of U.S. policy. Already in fact, a bill proposed by Indiana Congressman Todd Rokita would hold local city and county officials of sanctuary jurisdictions responsible for crimes committed by illegal aliens there. It's modeled off several other attempts in different states.
It is a hard argument to make –  that the policies of sanctuary cities, which refuse to assist federal authorities in their efforts to curtail or detain illegal immigrants, are somehow not culpable in the crimes those illegal immigrants commit. In these days when bartenders can be held liable for the crime of one of their customers driving drunk, it's hard to imagine such a legal challenge to a sanctuary policy failing in court.
Zarate's acquittal will hyper-fuel the efforts in Washington and in different parts of the country to push for construction of the wall between Mexico and the U.S., a project liberals shout down as preposterous but one that continues to gain popular steam among conservatives. Steinle will become the theme for the effort – watch for social media campaigns that call to name the wall project after her.
Most notably Zarate's acquittal will be the latest rallying cry for conservative policy to drive the 2018 elections, and those outcomes may have repercussions far away from policies on illegal immigration. Republicans have plenty of ammunition and solid arguments to wage in their efforts to win over uncommitted voters – visions of "Women's Marchers" setting fires in American streets, kneeling NFL football players, millennial meltdowns on inauguration day – now the faces of Kate Steinle and Garcia Zarate held side by side.
If the realities in this modern fight for the heart and soul of American culture are ponderous, the images are more so. In the tragedy of her death, Kate Steinle's contribution may be monolithic.
– Dane Hicks is president of Garnett Publishing, Inc., and publisher of The Anderson County Review in Garnett, Ks.

Posted by The Anderson County Review at 9:13 AM No comments: