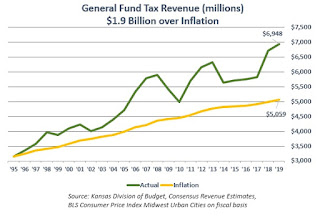 That vision which is stuck in the heads of many Kansas taxpayers – the one of Governor-elect Laura Kelly and her liberal Democrat henchmen storming into our state like marauding Mongols, ready to abscond with our daughters, thieve our livestock and pillory us with higher taxes for their new kingdom of governmental bloat – may be a little over-played.

But then again, maybe only a little.

As Kelly and her crew finish racking up their pre-inauguration Christmas list – bolstered by some $80 million to $138 million in extra Kansas tax dollars produced by the federal tax change windfall from last year – Kansas’ conservative lawmakers still in the majority in Topeka need to be thinking about how they plan to defend us and let us keep our own money. The term “Build A Wall” comes to mind.

Make no mistake, Kelly intends to spend, and spend big. Rumors of another $90 million to go carte blanche to the ever-increasing tab for Kansas education; groundwork for expanding Medicaid in Kansas to a slew of new users at between 150 and 238 percent of the federal poverty level (in other words, those with incomes half again or more than twice what the feds actually consider “poor”). And while just 10 percent of all those extra Medicaid payments will get added to your state tax bill, the rest will billow into the ballooning federal deficit that will still be your responsibility – or most likely your kids and grandkids – to one day pay through their own taxes.

Kelly’s plan compounds a situation of which most Kansans are unaware – that even though Kansas media relentlessly gnashed its teeth over “budget cuts” to education and poor people after Sam Brownback’s 2012 tax cut was initiated, the reality is that state spending overall continued to climb. To some government agencies reductions in their planned spending increases for next year are referred to in their press releases as “budget cuts,” and regurgitated by reporters and special interests until the public believes it.

So gravity determines the following: Kansans are and will continue seeing a tax increase through the federal/state income tax incongruence even if legislators do absolutely nothing, because the way you pay your federal and state income tax right now amounts to an additional Kansas tax all on its own.

Bear in mind this additional state/federal extraction of your dollars is above and beyond the $600 million state tax increase lumped onto your back last year by legislators, who eventually had to cover for Gov. Sam Brownback’s inability to make his 2012 tax cuts contingent on state budget cuts. Turning up the tap on your taxes has spewed forth even more money than planners forecast, with monthly revenue collections exceeding estimates for several months this year.

Add it all up and what do you have? An incoming liberal governor with big spending plans and a nice pot of extra money that used to be yours just sitting there unguarded. Of course it won’t be enough to rescue the state from the legacy of Darth Brownback the way Kelly wants – not quite – it’ll require a little more.

So our legislators – the ones who weren’t derailed in the election by the mob of Johnson County liberals with “I Hate Kobach” bumper stickers on their Land Rovers, are going to have to build a wall – a legislative wall that protects us Kansas outlanders from more and heavier taxes. They can do that by giving us back that federal windfall – like members of the Senate tried to do last year before their bill failed – and by barricading off the governor-elect’s options to raise additional taxes to make Kansas government even bigger and more expensive. Kelly’s plan kicks off when she takes over the governor’s office in January. Legislators – start mixing your mortar.