Media attempts fail to bury wonder of the Trumpconomy

You have to dig pretty deep amid the muck of the anti-Trump media reports to find it, but it’s there – the story of just how good the American economy is doing since Trump’s election a year ago.

In fact, liberals in the Trump-hating media corps spread the news as sparingly as they possibly can, rarely allowing the sunshine of the country’s economic picture to shine through onto their latest incanted demonization of the president. You’ll notice the story instead is a looping narrative of factless, sourceless stories on Trump colluding with Russians, the ‘rebuke’ handed the president from some Democrat election wins last week, or Trump and the Japanese Prime Minister dumping their boxes of fish food into a koi pond. Does the mainstream media really have to wonder why we don’t trust them anymore?

The burgeoning economy is rarely discussed, usually only amid daily stock reports on the performance of the markets and in some obscure monthly unemployment report (which many mainstream media outlets have now taken to ignoring altogether).

It’s clear the news about the Trumpconomy isn’t going to be heralded with trumpets at the NBC building in New York. It’s going to sort of slip out between the lines.

First let’s look at jobs. Last week it was announced the U.S. unemployment rate had dropped 7/10 of one percent since January (4.8 percent to 4.1 percent), which translates to 1.1 million Americans back on the employment rolls. If you were among the ranks of the unemployed during the Great Recession, you know the difference in morale, self esteem and lifestyle which finding a job after protracted unemployment can make. Since Trump took office, 1.1 million people and families have experienced that same sense of substance.

The number of people working part time jobs for economic reasons last month (in other words, not because they chose part time work – typically what we would call ‘underemployed’ workers) declined by 369,000 to 4.8 million, and over the past 12 months since President Trump was elected, that number is down 1.1 million as well. Overall, the November report revealed the best U.S. employment picture since 2001 – or as millennials describe it – the prehistoric times before smartphones. 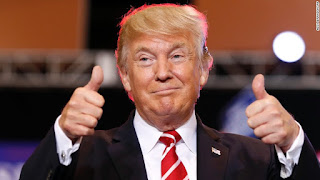 Perhaps buried even deeper in the bowels of those mainstream news copy piles is an explanation of just what those record setting gains in the stock market mean for the majority of Americans.

More than half of Americans – far and above the fabled ‘1 percenters’ – have money invested in market vehicles of some form or another. Anyone with an Individual Retirement Account (IRA), pensions, mutual funds, 401(k) accounts, 529 education accounts or Exchange Traded Funds – even about 20 percent of those earning $30,000 or less – has seen the benefit. For those investors, a stock market that has soared some 25 percent since Trump’s election to a record-setting score card of 23,000 is a new source of confidence and economic stability. That $5.4 trillion in market gains spread out across more than half the population is a fertile and solidifying backdrop for an economy that believes in itself – and that’s one of the most important attributes of an economy, after all.

Despite attempts by the Trump-hating media to discredit the president at every turn, those economic indicators are clear proof that the American business community, which invests and creates jobs when it senses opportunity, is indeed enamored with the prospects the president presents. It’s all a far cry from the nearly 400 point tumble the markets took the day after President Obama’s second election win.

This economic boom is an amazing story of benefit for our country and for the people who live here, but it’s being greatly sacrificed to provide airtime favoring the social and political agenda of a corrupt elite caste which really wishes this good news wasn’t happening.

More than half of Americans know the true story. And their wallets know it too.
Posted by The Anderson County Review at 6:44 AM No comments: