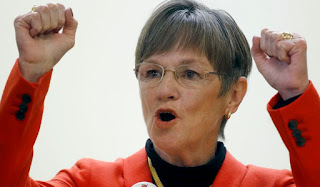 EDITORIAL – Thank you to Republicans in the Kansas Senate for reminding Governor Laura Kelly and Democrats in the Legislature that it is our money, after all.


Recently the Senate voted 25-14 to approve a bill that streamlines Kansas tax law with 2017 federal tax changes instituted as a part of President Trump's economic stimulus package. The change in Kansas would put $190 million in tax payments back into the hands of the corporations and individuals that paid it in –  and who will, in turn, spend it, save it or reinvest it.

It doesn't really matter what we do with it – it was our money from the start.

But Democrats in the governor's office and the legislature are miffed. They were hoping the taxpayers who paid that money in would just forget all about it and make it fodder for Governor Kelly's upcoming spending spree – buckets of additional tax money headed toward even more expensive state education finance, expansion of state Medicaid to able-bodied adults earning incomes at 138 percent of the poverty line, etc. Kelly's Christmas list is going to be expensive, and it will require another tax increase in addition to the one in 2017 (the largest in state history)  even if she got to keep our federal refund. Unless, of course, Republicans in the Legislature throttle back her drunken sailor spending plans.

It's easy for folks in government to develop the idea that the tax money collected from us is just some nebulous mass that's always been in state coffers and always will be. Whether you raise taxes or whether you just refuse to give back what is due doesnít matter – the idea is pervasive that it's money that really belongs to the government and never belonged to hard-working people trying to make their own living.

Of course, that's simply not true.

It is the earning power of individual taxpayers and of the companies we build and manage that provides those funds for government. Socialists now gaining ground in the modern political arena and who are electing Democrats to execute their policies would prefer the government got our paychecks first, and then in their generosity decided how much of our own pay we should get to put in our pockets.

The problem that Socialists don't understand is that without a vibrant, free economy there's no income to tax, hence no funding for government to spend. Once oil-rich Venezuela, where Socialism was so gleefully embraced years ago and where the starving population is now eating its pets and zoo animals due to economic collapse, is a prime example. Graft and cronyism and waste thrive in government when there's an unending supply of other people's money.

The Trump philosophy that pulled the gag off that $190 million in hostage tax money is the same philosophy that has hitched a rocket to the national economy. Unemployment is down, notably among minorities and women, jobs are being created faster than they can be filled, companies are re-tooling for American production and consumer confidence is zooming.

And as far as we know nobody's eating dog, unless that's just how they roll.

But these profitable lessons in solid economic theory won't convince Governor Kelly and Kansas Democrats to turn that money back over to Kansas workers and let them plug it into the state's economy the way they see fit. Kelly most likely will veto the measure when it hits her desk, and put the squeeze on Republicans to count up enough votes to try to override her veto.

But Kelly needs to be wary in coveting money that belongs to so many Kansans.

She won the governor's seat only because latte-sipping liberals in Johnson County, where 22 percent of the state's registered voters reside, wanted to heel and hide Kris Kobach to a barn door for being a conservative. Conservatives, however, gained seats in the House and Senate across the rest of the state.

Kelly should return that tax refund because it's the right thing to do. Lacking that vision, she should do the math in the Legislature and imagine, as she lusts after money that's not her's, just how rough Republicans might make her next four years.