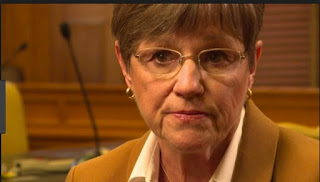 ANALYSIS – Fresh from pick-pocketing our $190 million federal income tax refund with her veto of SB 22, Kansas Governor Laura Kelly and Lt. Governor Lynn Rogers last week barnstormed Kansas like a 2019 version of a Motley Crue tour, belting out the praises of obsolete Obamacare Medicaid expansion and partying hard on the promise of bigger, richer government.

But unlike when The Crue buzz-sawed through Bramlage Coliseum in Manhattan that spring of 1990, this time you’re not going to have a choice whether or not to buy a ticket. In fact, Medicaid expansion – which raises the poverty line so some 150,000 additional able-bodied, childless adults can qualify for publicly-funded benefits, will complete Kelly’s tax-hike trifecta when combined with your federal tax refund dollars and that $90 million for new school funding approved in recent weeks.

For the Democrat Governor, Democrats in the Legislature and Democrats masquerading as Republicans who support that raucous spending, the early months of the Governor’s term has been like one great big backstage party. But the hangover’s coming.

With Medicaid specifically, no one’s yet answered what becomes of poor, legitimately needy people after the program expands to include adults who are 38 percent (italic) over (end italic) the present poverty line? Can the needs of people at the bottom of the scale still be served once we include 150,000 additional people who previously made too much money to qualify?

In this way, Kelly’s love affair with Obamacare is a major reset in the way Medicaid used to be viewed in Kansas; from the old concept of providing healthcare for people who can’t provide for themselves, to providing it for those who are able to work and find other options on their own.

And the extra head count is just the beginning. States which have jumped on the “free government money” bandwagon of Obamacare found new enrollees actually numbered an additional 50 to 100 percent more than the initial estimates foretold. That means Kansas’ new 150,000 enrollees could possibly be 260,000 to 300,000, with total costs as high as $1 billion per year. Even with your federal taxes and deficit spending going to pay for Obamacare’s offer to pay 90 percent of a Medicaid expansion, that still leaves Kansas on the hook for a cool $100 million in additional real cash spending – every year.

Where’s that extra Kansas tax money going to come from?

To help with the political and financial baggage of Medicaid expansion, Kelly joins the Kansas Hospital Association on the chorus that more Medicaid dollars will save your local hospital. Granted, Medicaid expansion might add a little revenue for Kansas hospitals, but certainly not enough to fix what ails them.

Kansas’ rural hospitals aren’t struggling because of too little Medicaid funding. They’re struggling because their margins are thinner than their urban cousins, and because the Kansas economy is weak – just ask any small businessperson in the state who’s trying to scratch out a living outside of Johnson or Sedgwick counties.

The flow of money in our state is still heavily impacted by low oil prices and by low farm commodity prices. Also, we hemorrhage population – college graduates and productive, working-age families with good incomes and private-pay health insurance leave the state in droves for greener pastures, taking their health care dollars with them. Couple that with higher taxes already wrought upon us by ever-increasing school funding and a federal tax refund that should have been ours and not state government’s, and it gets easy to tell why our hospitals struggle for enough business to remain open.

If our governor had a modicum of the initiative it takes the average concert goer to rush the floor barricades and make it to the front of the stage, we’d already have a better option than another “easy money” government program. The best Kelly can do is keep us in the nose bleed section.