Thanks to new president, a bright graduation future 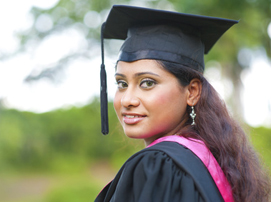 If you’re graduating in these commencement weeks you truly have reason to celebrate. Thanks to last November’s election, your hard work and accomplishment will gain traction faster and better now than at any time in the past decade.
To steal from another era of optimism born out of a previous and similar national malaise… “It’s morning in America again.”
Yes, despite all the continuing wailing, excuse-making and scandal baiting from the losing side who would have gifted you with a far gloomier graduation climate, you’re going to enjoy a surging economy. You’ll enjoy a more secure nation. You’re witnessing a renaissance of American spirit which is woefully overdue and already leaving its naysayers behind yearning for Russian fairytales, safe spaces and uterus hats.
Most demonstrated of course after the long American winter is the blossoming economy. Companies, employers, financers, innovators, risk takers – it turns out they’ve all been sitting on the sidelines waiting out the cold, dark skies of the Obama years and watching for the sun to come out. Trump’s election kick started pent up initiatives and immediately brightened business prospects in the country to the point that investor markets bumped up literally in weeks to record-setting levels in response to the new mood of optimism. The proof is in the numbers, and it is undeniable.
That is critically important for the country in which you will be, as a new graduate, seeking employment after college or determining a future course of training or education after high school. It means your college investment fund is worth some 15 percent more than it was on November 7 last year, along with all the other retirement funds and investment accounts now being contributed to by your parents or grandparents. The value of those companies is increasing and their stock prices going up because their stockholders are optimistic that things are going to be better for business and they’re going to make more money. It’s a powerful sign.
It also means your chances of finding employment – either a summer job painting vintage furniture for some eclectic boutique, part-time in retail, in food service, or a full time job for a Fortune 500 company anywhere across America – is better than when businesses were depressed and pinching pennies over most of the past decade. And make no mistake: A job equals empowerment.
The reason for all that? It’s because business believes a Donald Trump presidency will be more appropriate for making money than the previous administration. Remember: “making money?” That’s important. If you’re graduating and you haven’t figured  that  out yet, then you need to hand the diploma back.
Other national morale boosters executed by the new president: Trump froze federal hiring and reduced the federal deficit by $100 billion in is first 100 days as president (Obama increased federal spending 560 billion in his first 100 days, and later hired an additional 1,600 Internal Revenue Service agents to help ensure compliance with mandatory health insurance requirements – neither resounded well with tax payers).
In Trump’s first three months on the job the U.S. economy created 312,000 new jobs. Industries, saved from the choking “climate change” regulations championed by the previous president, are hiring. The U.S. manufacturing index (yes, we DO still manufacture things in this country) has skyrocketed to its highest mark since 1983 when Reagan was president. Housing sales are red hot. Unemployment nationally is at 4.4 percent. Newspapers like this one and job websites are teeming with vacant positions seeking workers.
The new president has set a tone of America First, and he shows a love for our nation and its interests the likes of which many of you haven’t seen since your childhood. He has pledged himself to the security of our own borders – illegal immigrant crossings from Mexico now down 67% – and against the world’s bullies and terrorists with deadly use of our military. He has re-established an American presence in power and in wealth on the world stage.
This is a time when graduates – as well as the rest of Americans – can thrive. That opportunity is what we want from a president, afterall.
Hopefully, you’ll never again know a time like we’ve endured most of the past 10 years. Hopefully you’ll never see a time when your country was nothing but a shell of itself and weakened by interests that shame America for what it is and what it can be, rather than embracing and celebrating it.
A bright picture for our graduates? Indeed, and long overdue.
–Dane Hicks is president of Garnett Publishing, Inc., a media company located in Garnett, Ks.
Posted by The Anderson County Review at 10:56 AM No comments: