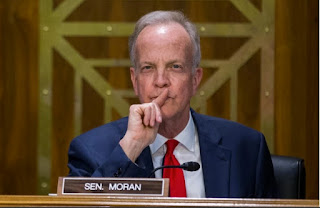 In Kansas Senator Jerry Moran’s world, Washington, D.C., is a constructive, intuitive place where everyone has logical, common goals unfettered by unseemly influence or ulterior motives; a place where divisions between Democrats and Republicans are readily bandaged with a kind word and a solid Howard Cunningham-style pep talk; a place where the sun rises with hope each day and the Cleveland Browns have a chance to win a Super Bowl.

Other Republicans look out upon a national battle map where our representatives are engaged in a cold war between the struggling Democratic Republic and the emerging old-style Socialism being embraced by Democrats. They see they things differently.

For the Kansas Republicans who twice elected Moran to the U.S. Senate and recoiled in disgust last week when the Senator announced he would support a resolution against President Trump’s border wall emergency declaration, the betrayal is one of Shakespearian proportion. Few Republicans view the situation at the nation’s border with Mexico as anything less than an immediate national emergency, either from the standpoint of the human tragedy befalling the illegal immigrants attempting to make the trip through Central America and Mexico, or from the standpoint of a flat-out invasion of undocumented freeloaders into our debt-plagued country.

But Moran’s betrayal of the Trump agenda didn’t just begin here. Moran has spent much time already wringing his hands over this rogue, activist presidency. Moran’s button-down white shirt and red tie institutionalism has squirmed in discomfort as Trump brazenly slugged it out with the Socialist hoards in both houses led by Nancy Pelosi, Chuck Schumer, Bernie Sanders and Alexandria Occasional Cortex. Moran can’t understand why we all can’t just get along – why adult legislators can’t act like adults, come to a compromise, and work together. The president and most of the country, however, have given up expecting choruses of kumbaya.

The senator may not remember the president’s efforts at negotiation with House and Senate Democratic leadership over the weeks leading up to and including the December/January government shutdown. Trump wisely capitulated in order to put federal workers back on their jobs and re-fire the colossal engines of federal finance. Then he made fresh offers to advance discussions with Democrat leaders anew – and was flatly refused yet again.

And perhaps Moran hasn’t been watching the agonizing ironies besetting his Democrat colleagues. On one hand they have to keep Trump from gaining a win of any kind that might help in the 2020 election; on the other they have to try to stop the leftward stampede of their party toward bona fide Socialism so as to not alienate legions of centrist voters and stampede them into the Republicans’ welcoming ranks. Pelosi and Schumer are fighting a battle on two fronts, and they're losing.

Just as disappointing was Moran's melba toast manifesto explaining his betrayal. In an 18-point excuse released after the announcement, Moran claimed the 1977 law passed by Congress that allows Presidential Emergency Orders is unconstitutional and should be appealed or amended. He says he supports better border security, (but…). He said there are yet other ways for the president to fund the construction of the wall. He said he’s always been opposed to the overreach of presidential powers even under President Obama. It’s a matter of conscience, and sets the precedent for abuse of power from presidents to come, Moran argues.

Such noble foresight, but one wonders how many illegal immigrants and their children signed contracts in blood with ruthless Coyotes to cross the border while Moran penned his law professor’s lecture response? Or how many criminal illegals sold drugs or staffed the armies of Los Angeles gang bangers? Or how many bought Social Security numbers stolen from native-born American children to establish their bogus identities? Moran's treatise on his own lack of leadership is like debating the virtue of fluoride in public water with the firemen who’ve come to extinguish your blazing house.

The expectation is that Trump will veto the measure, and opponents lack the votes to overturn that veto. If so, the wall may become secondary to Kansas Republicans, who will then assess Moran’s betrayal of trust and whether he has a future as a Kansas Senator.