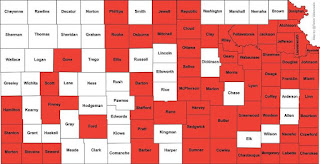 Governor Laura Kelly’s one-size-fits-all approach to the reopening of Kansas after the Covid-19 shutdown further damages the bureaucracy-hammered Kansas economy, and puts her in the running with her friend and former governor Kathleen Sebelius for the title of most economically damaging governor in state history.

Last week Kelly laid out a three-phase blanket plan for the reopening of Kansas that leaned fully on top-down administration and centralized authorization. Its mandates were based on the assumption that every county, city, neighborhood, nook and cranny of the state was at equal risk from a resurgence of Covid-19. Every restaurant, car dealership, hair salon, bank, livestock sales and auction company, insurance office, and other potential commercial or recreational gathering place was ladled with another helping of state-mandated restrictions, which in reality varied only slightly from the rules in place prior to May 3 and which will extend through at least May 18.

That, despite a continuing confirmation of the ratio between infections and population which has chronicled the outbreak from the beginning: heavier concentrations of population have shown themselves to be consistently more at risk.

Case in point from Saturday’s Covid-10 report from Kansas Department of Health and Environment: of Kansas’ 105 counties, 23 had recorded no cases of people sick with the virus since public health officials began counting, and 57 counties had fewer than 10 cases. Those case counts began when the beginning of the “crisis” was broadly recognized in mid-March and they don’t account for the individuals who have since recovered from the bug.

Still, under both the initial shutdown mandate and even the reopening order from the Governor’s office, the Cactus Club Restaurant in Ness County where no cases were ever recorded was torpedoed with the same executive fervor as was J. Gilberts in Johnson County, where nearly 600 residents tested positive.

Kelly’s carpet bombing order of the Kansas economy is evidenced by state tax revenue figures for April which are less than half the $1.18 billion Kansas took in during April 2019. March unemployment claims skyrocketed as well in the state to more than 20 times the most recent weekly average.

What’s worse, Kelly’s phasing in of a reopening plan that treats the whole state with the same precautions needed where the virus is more present – Johnson and Wyandotte counties for instance – ensures a continuing erosion of the state’s economic might.

This level of damage wasn’t necessary.

Had Kelly the foresight to see past the need for government to seize the roll as sole protector of the populace, she might have judged the legitimate but measured health concerns in view of the more global damage to be done by such all-encompassing orders. Governors of states like South Dakota, Nebraska, Arkansas and others made recommendations and set guidelines for their populations and their commercial sectors, then trusted in the logic and judgment of their citizenry. They were never under shutdown orders, and their economies saw less damage and have better prospects moving forward. By population, demographics and geography, they are greatly similar to Kansas.

In Kansas the tally of the carnage is yet incomplete, but Kelly’s debacle will most certainly approach that of her friend and cohort Kathleen Sebelius in the latter’s derailing of a $3 billion private investment to expand a coal-fired electric generating plant at Holcomb some years back. Sebelius’ embrace of green principles was intended to put her on President Obama’s political short list for bigger things. Indeed, her appointment to the cabinet post of director of Health and Human Services during the roll out of Obamacare left much to be desired. For her floundering ambition, the Kansas economy paid a historic price.

Kelly’s reopening plan should have stair-stepped its phase restrictions based on the documented impact to date of Covid-19 in individual counties, instead of stamping all of Kansas’ communities like the same bottle cap. Her over-governance has hurt Kansas through the days of Covid-19, and will make a longer road back than need be.