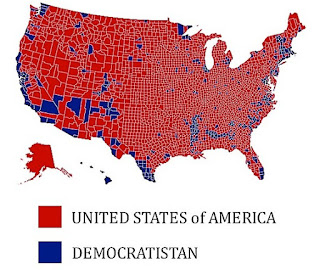 EDITORIAL – Are you a rock-bellied Red Stater tired of spending your entertainment dollars in liberal bastions that elect socialist-leaning ne’er-do-wells? Are you anxious for a list of places where your hard-earned R&R dollars can go to benefit businesses and voters more akin to your political persuasion?

Many of us have come to realize we’d prefer to support #MAGA believers by making our long-awaited time off this year a Red State Vacation.

Heck, in a lot of cases it’s a simple safety issue. We were barely 12 minutes into the New Year last week when Chicago, where Democrats have voted early and often for three generations, logged its first incident of gun violence of 2019. A 12 year-old boy was looking out a second story residential window when a bullet whizzed through the glass and hit him in the hand.

So forget those fabulous weekend flight deals to Chicago, or the smog-ridden Hollywierd beckoning of the People’s Republic of California, or the Cheech & Chong intellectualism of Denver or the Colorado Mountains. Say goodbye to the overpriced calamari and tomato basil appetizers at those vanilla latte Johnson County hives where RINOs plot Democrat governorships and socialist takeovers of the 3rd Congressional District. Why not spend your recreation dollars in places where people vote like you do?

Las Animas, Colo., flipped from Democrat to Republican in 2016, 55 percent Trump to 39 percent Clinton. There’s not much Red in Colorado, but in this little pocket you’ll find tons of Santa Fe Trail history with Bent’s Old Fort and Boggsville, both historic trail points. Plus, you’ll find the best guacamole and salsa in Southern Colorado at Carmen’s Restaurant.

Don’t forget Hooker County, Neb., whose population of 736 souls don’t see many visitors, but which mustered 86 percent of their vote for Trump and 10 for Clinton. The Sandhills are cool, and you can float the Middle Loup River. Mullen has a new disc golf course, and the Hondo Lanes bowling alley is newly renovated.