My 4 year-old, the Mexican drug mule 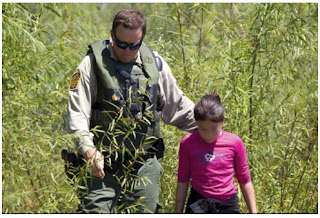 My youngest daughter was four years old when her Social Security number was found in the possession of an illegal alien living in Lincoln, Neb., who’d been arrested in connection with a methamphetamine bust.

So I have a unique perspective on criminal immigration and the major underground industry which buying and selling stolen SSI numbers has become in the illegal immigrant community. The crime reaches to every corner of the U.S., even 3,000 population Garnett, Kansas.

It is an unfortunate component of countless crimes involving illegal immigrants, including the death of Iowa college student Mollee Tibbetts, whose body was discovered last fall in an Iowa cornfield a month after she went missing while jogging. A 24 year-old illegal who worked on a nearby dairy farm led investigators to the body and has since been charged with her stabbing and murder. His trial is set for April.

Indeed it’s the trade in stolen SSI numbers that helps facilitate the illegal immigration challenge that faces the U.S. Just as big a problem is that the Social Security Administration has virtually nothing to gain in helping solve the crime.

A SSI number is the magic key for people not legally authorized to be in the country. With it comes employment authenticity and a bona fide identity; it’s a guarantee that payroll taxes can be paid and unemployment contributions withheld, and that your employment identity will fade into the woodwork like so many millions of tax paying workers. It is anonymity that illegal immigrants pay dearly to have.

In Mollie Tibbetts’ case, Christhian Rivera apparently falsified his credentials used by the E-Verify system, the internet-based process that runs an individual’s identity through Homeland Security and the Social Security Administration to determine one’s status both nationally and internationally. Rivera’s employer says Rivera passed the E-Verify check. While the full details are not yet known, it is highly likely Rivera had a stolen SSI number.

The sobering phone call I got at my office that day 11 years ago from a DEA agent based in Omaha was as enlightening as it was terrifying. His first question: Did we have any domestic help working in our house? It’s common, he explained, for house cleaning staff working in people’s homes to gain access to children’s SSI numbers and sell them to brokers who then resell them to illegals in package deals that set them up in this country. Hospital staff in children’s wings or doctor’s offices work their opportunities too, he told me, because they have access to those numbers from the minute they’re assigned at birth through any time the child seeks medical treatment thereafter.

They like kids’ numbers, he told me, because they’re less likely to be used much and they’re pretty much inactive until the first time the kid pays taxes from a summer job or has to file a tax return. In our case we believed our daughter’s number had been compromised for at least two years – and at no time did it ever seem strange to anyone who worked at Social Security that a four year-old would be paying employment taxes from a construction job in Nebraska?

But then again, why should Social Security care who pays into the fund? The more the merrier, as far as SSI is concerned, considering its pyramid scheme mechanics have it set for eventual insolvency anyway.

I also have reason to wonder how extensive is the background check within the E-Verify system if a four year-old paying employment taxes from a construction or farm labor job doesn’t raise a red flag with someone.

Now our family's worries are double.

Not only do we have to be concerned that multiple as yet unknown others may have been sold our daughter’s SSI number, but we have to wonder, when one day included as a part of her college applications, car loans, mortgage documents or military enlistment papers, will her SSI number be flagged by some leftover error from a drug bust in Lincoln, or who knows what else?

Common sense dictates, as border patrol agents and those who live close to the border recount constantly, that we need a wall or "physical barrier" or whatever you want to call it to help stem the tide of illegals surging into our country. But we need a credible screening system within the Social Security Administration to ferret out stolen numbers and bogus employees to countermand the damage done by criminal illegals who are already here.

-Dane Hicks is president of Garnett Publishing, Inc., and publisher of The Anderson County Review in Garnett, Kan.

Posted by The Anderson County Review at 2:10 PM