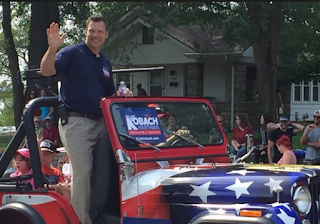 by Dane Hicks –
It isn’t just anti-Second Amendment sentiment that’s run amok in Iola with the denial by the Farm City Days committee to allow Kris Kobach’s jeep and machine gun parade entry in the FCD Parade – it’s nothing short of flat out political prejudice.
What a shame it is that this political animosity has crept into an organization as institutional as the Iola event. Farm City Days was started four decades ago as an opportunity to bring area farmers and the ag industry together with townies to celebrate the works of the farm and the market to which those farm goods are eventually sold. Democrats, Republicans, Independents – no matter – the idea was to focus on the partnership and the beneficial synergy of farm and town. It is attended annually by thousands from around the region.
That sentiment was the heartbeat of the organization since its inception in 1971, but now, like so much else in our country, Farm City Days has made itself about politics and the narrow, intolerant views of a handful of its organizers – all because a majority of its board has opted to foist its political beliefs upon the parade audience and restrict its parade entries according to that majority’s political leanings.
Kobach supporter and Iolan Don Erbert’s red, white and blue jeep with its replica machine gun mount is by far the most recognizable parade entry of the summer parade season in Kansas. Breathless, hand-wringing publicity from press outlets generated Kobach tons of free media during parades prior to the primary and made the rig the most memorable of the 2018 Kansas political season, perhaps even nationally.
The FCD committee told Erbert he could enter the parade with Kobach, but they’d have to remove the gun mount. Both men are vehement supporters of the Second Amendment, and the obvious message was that if you want to be in our parade, you’re going to need to give up on your convictions. Justifiably, they declined.
But the question can’t be denied: did the FCD parade organizers discover they’d struck on a veiled but effective way to keep Kobach out of the parade by attacking the illustration of his Constitutional right?
The move overall is an interesting one, considering Allen County Republicans, who cast some 90 percent of the votes in the primary, picked Kobach handily over seven contenders in the GOP field.
Firearms are part of the American heritage, and as such part of the tradition of parades. Military color guards frequently march in parades nationwide with rifles as part of their units. Colleges and high school drill teams lead bands and carry replica rifles to conduct drill exhibitions with them. Western re-enactors carry firearms as part of their frontier regalia. Military rifle teams honor the loved ones of fallen soldiers with 21 gun salutes. Firearms are ingrained in the American sense of celebration and discipline. There is certainly no basis in history or American culture to prohibit a replica firearm from a parade float or entry.
Unless of course you’re in Iola, and it’s Kris Kobach.
That vote of the Farm City Days committee, which was not unanimous, resulted in the resignation in protest by its chairman. Now, word is that some sponsors – those who perhaps have a better sense of American culture and both the First and Second Amendments to the Constitution, are pulling their support.
What a terrible thing for a handful of politically intolerant people to do to a venerable community event, all in the name of squelching a candidate and his very American beliefs.
–Dane Hicks is publisher of The Anderson County Review in Garnett, Kan.

Posted by The Anderson County Review at 12:07 PM